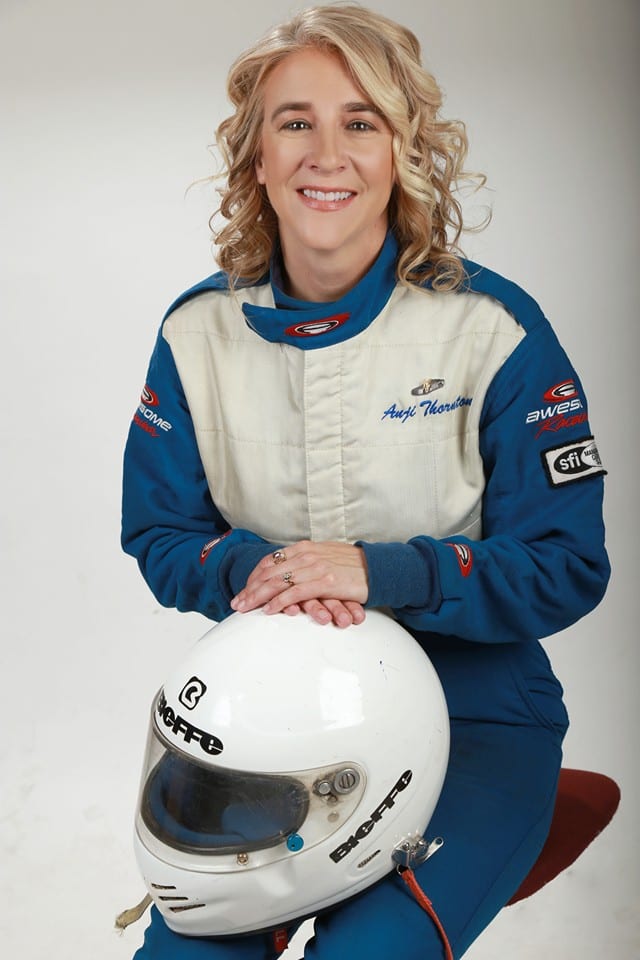 Inside Line Promotions – LAS CRUCES, N.M. (Jan. 3, 2018) – Anji Morgan-Thornton is the epitome of a renaissance woman.


The 46-year-old from Las Cruces is a scholar, a musician and a race car driver.

Morgan-Thornton became a high school music educator and later she implemented the first dual credit program in the area, allowing students to obtain high school and college credits in music appreciation, music fundamentals and the history of jazz and rock.

In 2009, Morgan-Thornton founded the mariachi program at El Paso Community College, where she has serves as a music professor, Spring Arts Festival Lecturer and adjunct faculty senator in addition to her career as a high school dual credit instructor.

“Music has been very important in my life and I’ve been blessed to have had many great experiences inside the classroom and out,” she said. “I believe in the power of music and have seen its impact throughout my life.”

Music isn’t just a career, it’s her passion. Morgan-Thornton has sung in the professional group Bella Voce since it was founded in 2013. The group performs multiple times each year across New Mexico and Texas and has participated in a European tour, which included a performance at the Vatican in Rome. With more than 30 years of professional stage experience as a diverse musician, Morgan-Thornton performs classical to mariachi, is a trained vocalist and plays multiple instruments. She performed with the El Paso Dioceace when his holiness Pope Francis came to the El Paso/Juarez area.

However, her roots in music isn’t what sets Morgan-Thornton apart. It’s a different passion, one that features both noise and dirt, that has helped Morgan-Thornton not only reach new heights, but also to overcome the most devastating moment of her life.

I’ve always had the passion for racing,” she said. “When I met my late husband, Steve, in college we had so many things in common. Every aspect of our lives seemed to blend well together and we complemented one another in so many aspects, especially in racing. When we moved to Atlanta he worked for a company called Year One, which is a supplier for high performance and muscle car restoration. They were corporate sponsors for several major racing events. We had the privilege and honor of meeting several drivers and teams and people who were affiliated in racing in several different realms.

“(After moving back to New Mexico) one of Steve’s clients, Rex Porter, who is very avid in dirt track and asphalt racing in Southern New Mexico, invited us to a play day and to drive his Super Truck and he introduced us to people in the racing community. We built an enduro car and raced that for a couple of years before we bought a truck.”

Steve Thornton competed while Anji Morgan-Thornton waited in the wings until her opportunity to climb behind the wheel came in 2004. “Steve had to work the second shift at his job on a race night,” she said. “He was in the top 10 in points and we figured out all we had to do is have someone drive the truck for one lap and he’d still maintain his points. We hadn’t quite finalized the setup for me with Steve being 6-foot-5 and close to 300 pounds. I’m 5-foot-6 so there was the obvious of having to move weight around and having to build a seat for me. It was a little bit rough trying to drive the truck and fit over the seat, barely seeing over the steering wheel. They put a roll of quarters in my racing gloves so I could reach the ignition. They had to strap blocks of wood on the throttle and brakes so I could reach the pedals.”

Morgan-Thornton drove Porter’s truck during a practice day before piloting her family’s car for the first time.

“These guys are like family,” she said. “They helped me unload and get the preparation underway and helped me get belted in. All I needed to do was complete one lap to earn points, but I didn’t just do the one lap. I wanted to stay out there for the whole race. I said, ‘Let’s start in the back and let me feel my way through.’ It’s a whole different mental mindset under race conditions. The goal was to finish the race in one piece and not get involved in any wrecks. I wanted to hold my line and race clean. We did and had a very successful night.” Morgan-Thornton was hooked and the following year she began competing on a regular basis. For several seasons she and her husband raced before life took a shocking turn in the fall of 2008.

“Steve passed away unexpectedly in October of 2008,” she said. “I’ve had setbacks and horrible experiences in my career and everyday life, but this has to be the absolute worst. You have to keep moving forward. You have to take something that is a tragedy and you have to move forward. We need to live life to his fullest.” The tragedy took its obvious toll on Morgan-Thornton, who leaned on her racing family to deal with the loss. “After my family was notified and they were on their way, I called Rex and he was there for me,” she said. “He was like a grandfather figure. The whole truck class showed up at my shop asking what do you need.”

Morgan-Thornton returned to action the following season and has been a regular on the scene ever since. She registered one of the most special moments of her career in 2014 when Morgan-Thornton captured a trophy dash victory. “I was so excited I was almost doing kart wheels,” she said. “I about knocked the wind out of our poor track promoter.” Morgan-Thornton wants to continue to evolve in the sport that has not only helped fulfill a passion, but guided her through the most challenging moment of her life. “I want to keep growing and move into ARCA,” she said. “I love what I do. I’m very passionate about it. I enjoy all the aspects of it, including spending time in the shop with our group and the comradery with everyone.

“I love it here and some of my family is in this area. I’d like to stay in the Southwest, but you have to go where the opportunities are. I’m open to other opportunities. I have short-term goals and long-term goals. This year I want to connect with ARCA drivers and teams and build those relationships. I’d like to go to an ARCA race, go into the garage and be able to support a team so that way I can build a successful pathway.”

While working on advancing her career, Morgan-Thornton said she plans to continue racing in New Mexico and is excited to get back in action and prepare to compete in an x-mod race car for the first time in 2018. “I’ve been very fortunate to accomplish a lot of my goals and live a lot of my dreams,” she said. “I’m well versed in my passions of education, music and racing, and I can’t wait to see what the future holds. Life is about living. I know that first hand.”MEDIA LINKS – Website: http://www.AnjiThornton.com Twitter: https://twitter.com/amtracing51 Facebook: https://www.facebook.com/AnjiThorntonRacing


Inside Line Promotions specializes in affordable public relations and media management for motor sports drivers, teams, sponsors, tracks, series, events, organizations and manufacturers. ILP Founder Shawn Miller leverages professional journalism with new media technologies and social networking to improve your exposure and the return on investment for your sponsors.
To meet the media relations needs of your program and to join Team ILP, contact Shawn at 541-510-3663 or InsideLinePromotions@gmail.com. For more information on Inside Line Promotions, visit http://www.InsideLinePromotions.com. 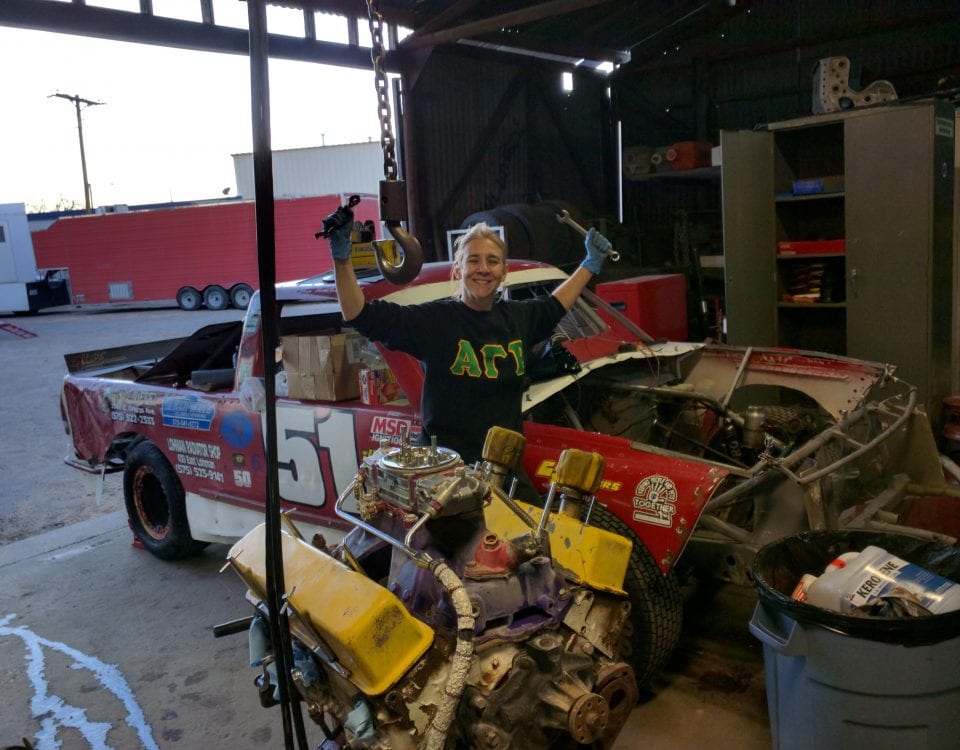